Note: First, please reference my research on snare drum’s dance-like character through history and the fandango dance, both relevant for my first example, where I also wrote about flamenco and Ravel’s bolero.

The first project is about composing four contrasting solo short pieces, between 8 and 16 bars, to show different character of different indefinite-pitched percussion instruments. For my first example, despite the usual military association of the snare drum, I decided to explore its dance-like feeling. The form I chose is fandango in the courtly style, which was used in classical music, as noted in my research. 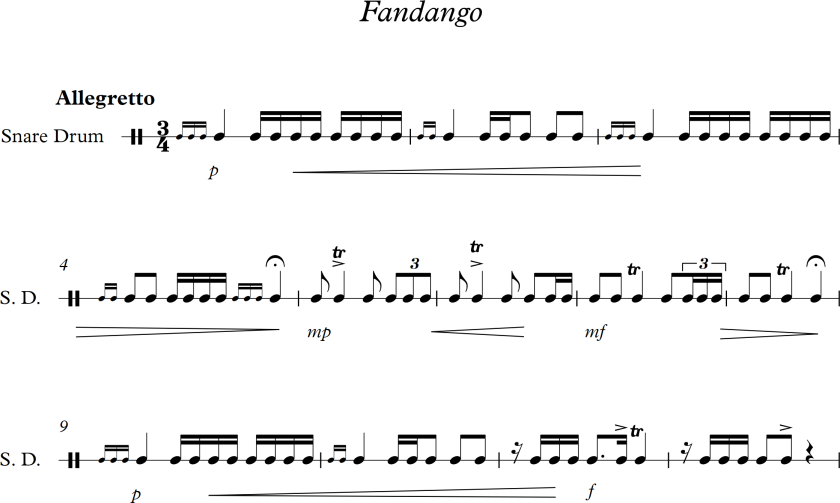 Below is the audio of the piece:

Fandango is known as a lively dance. It may seem a bit weird why I chose a bit more moderate Allegretto, but Aguado in his Fandango variations op. 16 shows how the tempo can range between Allegro and Allegro vivace, to even the slower Adagio. Aguado also used ornamentation (Fig.1), which encouraged me to use the various flams, rolls and etc. I think these add to the character of the dance.

The structure of this short 12-bar piece is a simple A B A1. The A section (bars 1-4) is a musical sentence that lasts 4 bars, with the 2 + 2 bars rhythmical form (which in melody is often a sequence), with a slight variation in its last bar in order to produce a cadence. A lot of fandango examples use the 2+2 pattern. For example, in Rameau’s Le trois mains (Fig. 1), and similarly in Soler’s fandango. (Fig. 2) 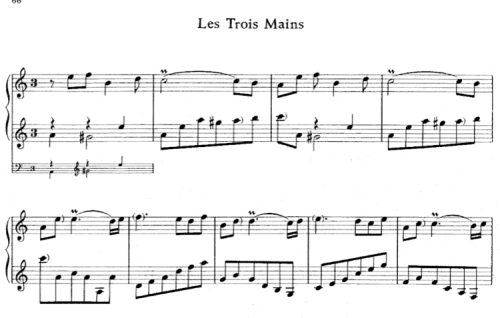 As for the rhythm of the A section, I already had it in my mind, before knowing what fandango is, and I think it works quite well for the dance. The first bar is similar to the rhythm that the castanets often play in the folk performances I have found (Fig. 3) and almost all of the examples of flamenco in art music usually contain 16th notes, which I have utilized. (Fig. 1, bar 4, and Fig. 4)

Section B (bars 5-8) starts with 2 bars that have a syncopation. (Fig. 2) The different rhythmical pulse and the trills (rolls) and the louder dynamics make B contrast the A section, adding more to the progress of the movement of the dance. The form is also different from the A. The 2nd bar is the repetition of the first with a slight variation in the last beat. The next two bars contain different rhythm that also follows the same structural pattern. The section may be considered a musical sentence because of the variation of the last bar, alluding to a cadence, though in my opinion, the section can also be seen as having two separate 2-bar phrases.

Section A1 (bars 9-12) is similar to the first, with the first two bars being the direct repetition, however, the last two bars change the rhythm and have an added crescendo that leads to f dynamics, and the surprise ending in the last bar, which often occur in the dance.

To conclude, I am happy with my choice of instrument since I think it successfully evokes the feel of castanets and the Spanish dance. The dry strokes of snare drum also give a nod to flamenco’s palmas, pitos and foot stomping. Overall, I think my first example succeeded in representing not just the fandango dance, but also the dance-like feeling of the snare drum in general, distancing it a bit from the usual military association. It’s also interesting, that despite having only rhythm, there are many creative solutions that can be found even with this type of limitation.