The instruments I’ve chosen for my first example were all used in my previous short solo or duet percussion pieces: snare drum, bass drum, triangle and tambourine, except for the cymbals, if we don’t count the miniature version – finger cymbals, which I did experiment with. I researched about them, which you will see on the blog.

Like the frame drum I’ve written about, cymbals are also among the oldest, ancient instruments. One of the first appearances of cymbal-like objects were discovered in excavations of pre-Aryan, Indus civilization dating from the time around 3000 BC. Sachs (1940: 151) writes that, although these could have been used as lids from vessels, their form with a central boss, and softly sloping and slightly turned up brim, is so closely related to actual cymbals, that these may be considered precursors or perhaps, prototypes, of the musical instrument. Blades mentions it’s not wrong to assume that around the time, in other places as well, cymbals might have existed in some form, as the metal clappers had already appeared and the metal crafts had been practiced, like in Chaldea.

However, as Blades (2005: 165) writes, the earliest actual use of cymbals that historians refer to was around 1200 BC, in the worship of Anatolian mother goddess, Cybele (Fig. 1) in Central Asia Minor.

Cymbals appear in Israel around the similar time, although the instruments was referred to in the Talmudic tractate, Arachin:

Sachs warns us it’s erroneous to assume over this passage that Jews got their cymbals from Egypt, since we don’t come across the evidence of first cymbals in Egypt until near the beginning of our era – almost thousand years later. Their first mention in 2nd Samuel dates from around 1050 BC, and they take a prominent role in the Old Testament for praise, worship or celebration. Bible mentions two different kinds of cymbals. One is tinkling or clear, the other harsh or loud – the two types we will also see in other cultures. In Psalm 150, David describes the two, as he exhorts believers to:

In the first millennium BC we find other examples in the West Asia, where they were used for various rituals and rites. Babylonian plaque, which dates from around 700-600 BC shows a lady cymbalist accompanying a male kettledrum performer. The cymbals are held there vertically, while on an Assyrian bas relief, from around 680 BC, depicts cymbals held horizontally. (Blades, 2005:)

From western part of Asia, cymbals spread to other parts of the world. Towards the countries of Eastern Asia, in China, they are enumerated among the instruments of an East Turkestanic orchestra which was established at the imperial court after the conquest of the Kingdom of Kutcha in 384 AD. However, according to the Yo Shu, the bible of Chinese musical instruments written in 1101 AD, cymbals came originally from Tibet. Most of the Chinese cymbals (Fig. 2) have a large boss, and the rim is either flat or curving upwards. They vary in size, with largest being from lama temple, but these are not as large as those in the Mongolian temples.

In India, cymbals might have been introduced by invading Hunas from Central Asia. (Sachs) They are first represented on a relief of the temple at Garwha which dates from the fifth century AD. In India we also find two versions: the bigger clashing cymbals, like jhanjha, are used with the temple services or in court orchestras, while the small, tinkling cymbals, like manjira (Fig. 3) are used in chamber music.

And Captain Meadows Taylor says the following about these small cymbals:

Another type of cymbals, called kubuji is used in one of the forms that really intrigued me – Ravana Chhaya, a rare form of shadow theatre surviving in Orissa:

These instruments can also be found in regions of Southeast Asia which were colonies of India. In Java, we have them depicted among two thousand reliefs adorned on the walls of the hindu-javanese temple Borobudur dating from 800 AD. (Blades, 145) Although Hindu music didn’t affect gamelan ensembles, Balinese gamelan ensembles, usually include cymbals, which they call cengeng (Fig. 4), to add to the excitement of the performance. Commonly there are six or more, and the player holds two of these small cymbals and strikes them against the remaining cymbals, which are mounted on a wooden floor stand. With alternating two hands, an energetic cengceng player can play very fast. (Spiller, 125) 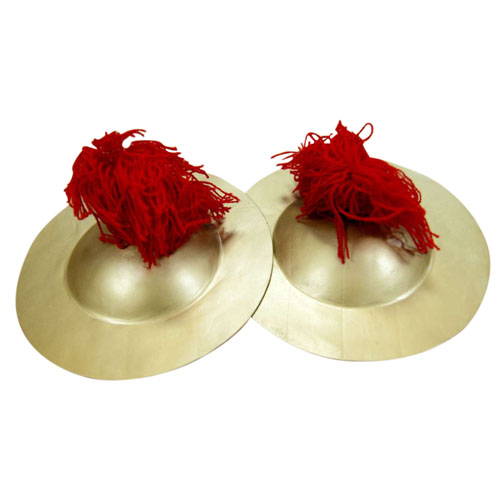 To the West, cymbals arrived in Greece with the rites of gods, such as the previously mentioned Cybele and also Dionysius, where once again we have the two types – the tinkling and harsh cymbals. Now, there is some clash of opinions (no pun intended) over when and how cymbals appeared in relation to Greece and Egypt. What is certain is only that they didn’t appear in the scenes from the Old or the Middle Kingdom. Some, like El Shahawy, write that they were used as early as the New Kingdom, and the International Standard Bible Encyclopedia () gives similar information about cymbals found in ancient city Ugarit, dating from time interval between New Kingdom and Late period. However, Hickman (1949: 474) writes that they emerged later in the Ptolemaic period. Some of these may suggest what Sachs insists – that the cymbals came from Greece to Egypt, but Blades (2005: 179) mentions there are sources that add Egypt among the places from where the instrument was imported to Greece.

Whichever the case, the Romans continued the Greek tradition and used cymbals in their worship of Cybele and Bacchus/Dionysius. Later, their role was in a sense elevated later from the orgiastic rites, into music for their theaters, as seen on a mosaic and a mural found at Pompeii dated around 73 AD, where small cymbals are represented. (Fig. 5a and 5b) In the ruins a set of cymbals in various sizes was found as well, that demonstrate exquisite workmanship. In Rome there is also a sculpture of Satyr with cymbals, this is a Roman copy after a Greek original, from 1st century BC. (Fig. 5c) 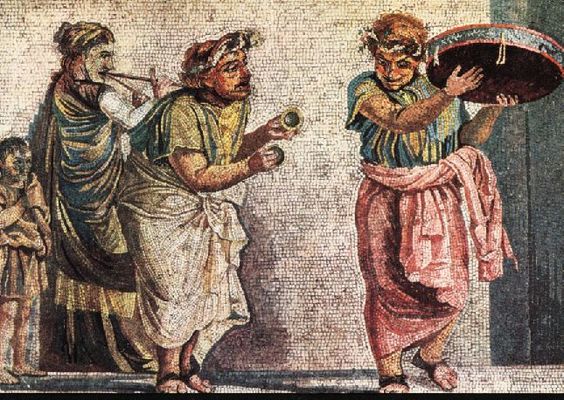 Fig. 5a. Mosaic at Pompeii with a cymbal player 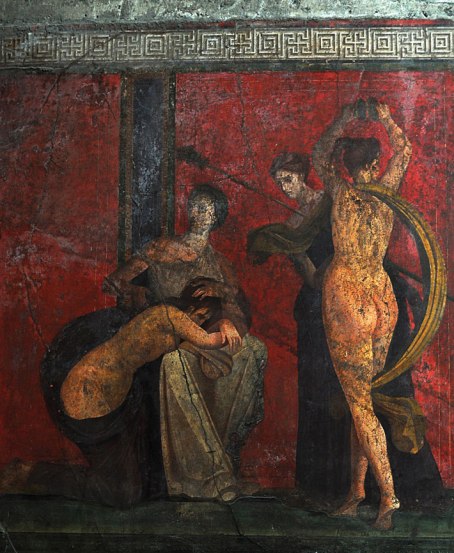 Fig. 5b. Mural at Pompeii with a cymbal player 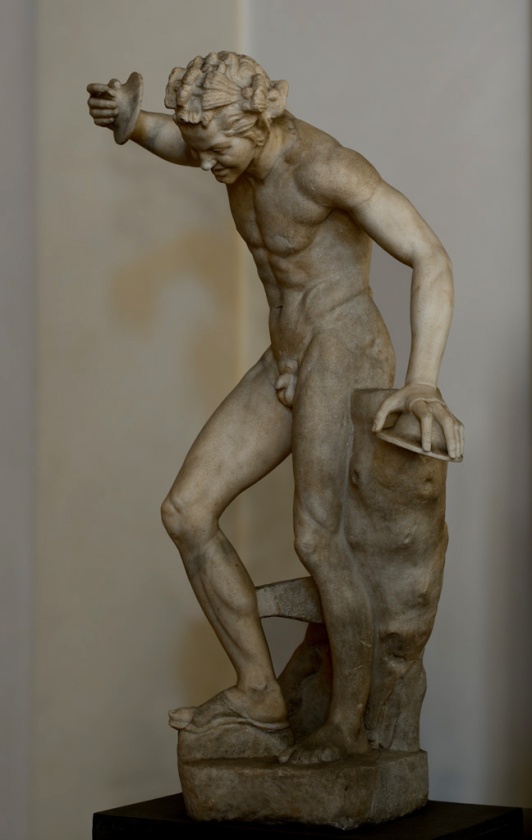 Cymbals had a similar destiny to the frame drum, with the adoption of Christianity in the fourth century AD – they were banned as wicked and overly stimulating. (Petrella) Unlike the frame drum though, there was a slight shift of thinking and the instrument was soon seen in the middle ages in paintings, for example in Westminster Abbey, and manuscripts, like in the Cantigas de Santa Maria, played by women and angels. This was probably due to the cymbals figure in the psalms, like the one above I quoted, but another reason is their tangled associations with the bell.

In fact, Rolle (n.d.) points out that medieval cymbals were two bell-shaped discs played by being banged together horizontally, probably tuned to a definite pitch. He continues that because of their similarity in shape to bells, these cymbals were corrupted by popular etymology to chime-bells, and Blades similarly says that “Where today we use the word cymbal for a metal disc with hollow center, the old name for chime bells was cymbal.” Allen adds that medieval commentators may have understood the 150th Psalm to refer to cup-bells, tuned and hung on a wooden frame, which seem to have developed from cymbals. French word chaplechou also refers to both cymbals and bells. (Peters, 246) Allen herself in her translation of Rolle’s book wasn’t sure which instrument Rolle was referring to. Forsyth (35) gives another illustration of how intricate these distinctions were. In the old English the word Cymbal or Cimball was commonly used for bell, but sometimes even referred to dulcimer and psaltery. Similarly, in the early 17th century Glockenspiel was known as the Clavicymbalum.

What is certain is that cymbals could not have played much part in church music and had very limited use. In secular music, like frame drum, they were probably played by minstrels and troubadours. (Cassar, 34-35) They could also have been used for celebration, like when William the Conqueror set sail for Britain in 1066. While they were preparing, Freeman (399) describes how the ships resounded with the sounds of drums and cymbals.

Over time, Turkey became the capital of cymbal making, and in 17th Century, Avedis (Fig. ), son of a Sultan’s Armenian metal worker, who took interest in alchemy, began to make the instrument for the court and revolutionized the instrument. His surname Zildjian, which can be translated as “Family of Cymbalsmiths“, was officially recognized when he discovered a process of making a bronze alloy which held its strength and temper even when hammered and worked to a previously unimaginable thinness. This technique allowed cymbals to have a distinct purity of tone that no other cymbal had ever achieved. Sultan was very pleased and commissioned Avedis to make cymbals for the Ottoman Janissary bands.

The Janissary bands then introduced the Turkish cymbals to Europe and because of the popularity of their mehter music, it was introduced into orchestra of classical music. Opera, with many of its themes rooted in ancient myths and stories was perfect chance to do so, and Nikolaus Strungk in his opera Ester in 1680, was the first to use it. In the Romantic era, cymbals appeared more and more. Among the composers to use them was Berlioz, the champion of the instrument, who in his dream orchestra featured four pair of contemporary cymbals and a dozen pairs of the definite-pitched antique (tinkling) cymbals. During the latter half of the nineteenth century, the Zildjian cymbals (Fig. ) became universally recognized (Blades, 171), and as Cohan (63) writes, many prominent European composers specified that only Zildjian cymbals be used in their works.

Today cymbals remain a standard percussion instrument of the classical orchestra. Here the two commonly used are clash cymbals, where we have two plates of cymbals that are clashed or brushed against each other (see the first video below) and suspended cymbals, where a single plate is suspended and struck with drum sticks or mallets. (See the second video) Sometimes used are also sizzle or hi-hat cymbals, but these are rather characteristic to jazz and other musical styles.

Just like in my other posts, I didn’t get too much into the technique, as I will have a special blog post about the technique and orchestral use of the instrument under the general research category. In my next blog post, I will write about the form I’ve chosen for the five instruments – the waltz.

Fig. 5a. Mosaic at Pompeii with a cymbal player

Fig. 5b. Mural at Pompeii with a cymbal player

(?) Cassar, Elizabeth (2016) A walk through the Middle Ages. Published by the author

Freeman, Edward A. () In: Historical Britain Blog Rochelle, Mercedes “William the Conqueror’s Landing, 1066” The History Behind the Story (2014)