Note: Before you take a look at my example, read the research I’ve done about the sonata allegro form. I’ve  already written about all three instruments I used here in previous research regarding the solo or duet examples. You can find these on the blog.

I’ve divided the score into parts for easier explanation, you can download the full score bellow, together with the mp3:

My sonata allegro for finger cymbals, tambourine and snare drum, set in 2/4, starts directly with exposition, without introduction. The whole section spans from bar 1 to bar 56. For the principal theme, which goes from bar 1 to bar 16, I chose a rather energetic musical period:

The period consists of two musical sentences. In the first, bar 1-8, the musical thought is stated by the finger cymbals, with the tambourine serving like harmonic accompaniment. Now, in my opinion, the end of the sentence reminds of dominant cadence, but it can be understood in other ways, since we don’t have the actual pitches. The second sentence, bar 9-16, similarly states the same thought, but it is set in the lower register, played by the snare drum. Tambourine once again has the secondary, accompanying role. Near the end, the finger cymbal joins in for the cadence, which in my opinion gives the feeling of the tonic.

The transition towards the subordinate theme, starts on bar 17, to bar 27: 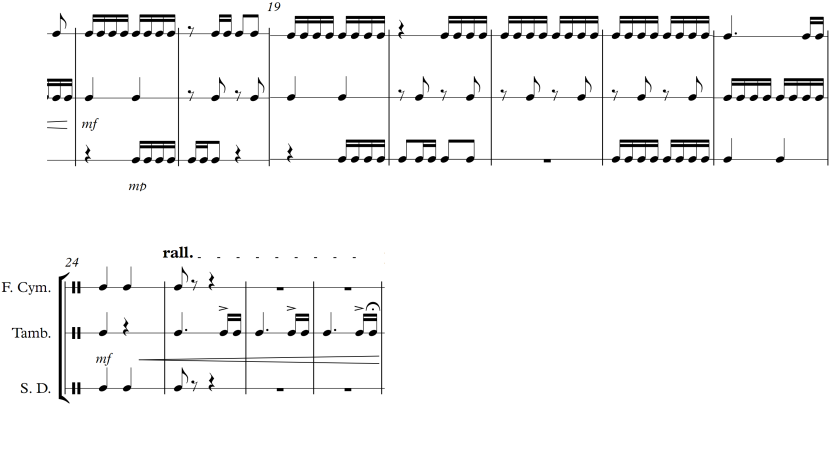 It can perhaps be divided into two sections. The first, bar 17-25, reminds of a codetta using the material from the principal theme. The short second section, bar 26-27, slows the piece down with rallentando and is only played by tambourine, which contrasts the previous part. The emphasis on the tambourine anticipates its new role in the subordinate group. As tambourine brings the attention to the middle register for the first time, this part gives an interesting illusion of the modulation and new key of the following theme.

The theme starts with the things that the transition suggested – the slower tempo, Meno mosso which the rallentando introduced, and the illusion of another key center, which the tambourine anticipated. The subordinate theme may also be a period, consisting of two sentences. The roles have reversed, and the finger cymbals and the snare drum don’t have the main role in stating the musical thought anymore. This is evident in the first sentence, bar 28-35, where the function given to the tambourine, while the snare drum provides the rhythmical support. There is a slight exception in the beginning of the second sentence, where snare drum states the musical idea, but only as a lower register retelling of the tambourine. Soon the latter takes over and reaffirms itself with a cadence. The rhythmical accompaniment is given by the finger cymbals. Note that, although still energetic, the rhythmical figures, such as the piano sixteenth notes, and other constructional elements also makes this theme contrast the principal one.

Second sentence doesn’t end with a firm cadence, but leads to the opening of the codettas, bar 44-52 that merge together almost until the very end of the expositions:

I won’t get to much into the explaining here, but as I’ve mentioned in my research, these fake endings and the chain they create, make a nice connection of the remotely related musical material and achieve a nice dramatic effect and suspense. The exposition ends with a short bridge, bar 53-56, that leads back to the principal theme and the repetition of the exposition. In the audio file, I’ve included the repetition. If you don’t have the time to listen to it, 2:17 is where the development begins.

The development spans from bar 57 to bar 97. I won’t analyze it in too much detail, as explaining each segment and techniques I used for them would take to much time. Generally, I expended not just the previous musical material, but also the ideas I used before, the dominant and submissive role of the instruments and their register, the illusion of modulation, the deceptive cadence-like endings. It begins with the repetition of the bridge from the end of the exposition, bar 57-59:

I used the repetition with a variation of the timbre, with tambourine. This tone color makes it seem like the development starts in a new key. From there, starts the main part of the development where I used a lot of material from the subordinate theme and its codettas, more than the principal theme, also the transition between the principal and subordinate theme, and freely experimented with them:

Finally, the development ends with a passage which is a bit reminiscent of the principal theme and announces the recapitulation, with the timbre reminding of the anticipatory chord I mentioned in the research:

The last section of the sonata allegro is the recapitulation. It spans from bar 98 to bar 148. The principal theme goes back to the original allegro vivace tempo with the literal repetition. As I mentioned in my research, the contrast from the exposition is provided by a modified transition, shorter from the previous, using only its second part and expending that idea a bit:

As can be seen, instead of the tambourine, the spotlight goes back to finger cymbals that take the leading role, which helps to create an illusion of remaining in the tonic.

Beside this tonal plan, the subordinate theme is minimally altered, only that the first sentence is slightly shortened and lasts 7 bars instead of 8:

Different from the exposition are also the codettas of the subordinate group that develop almost new material:

Finally, the whole sonata allegro ends with the codetta, rhythmically similar to the bridge leading to the repetition of exposition. Here, it ends with a more definitive cadence in the tonic:

To sum up, this was quite a long piece to write, lasting 148 bars. I think I’ve shown a lot of creativity in recreating and approaching the form of sonata allegro, and demonstrated how even indefinite-pitched percussion instruments can allude to tonal plans. The only part I am not satisfied is that in notation for dynamics, as in my other examples, I followed Sibelius’s playback. Still, I enjoyed experimenting with this example, and it definitely opened a new way I understand and compose music.