Note: Before you take a look at my example, please read my three-part research. There, I wrote about cymbals, but more importantly, about the origins and different forms of waltz. Some things here will reference that.

For easier explanation, I will divide the sheet music into the sections I’m referring to. To see the full score, you can download it below, with the audio.

First, I titled my waltz, because I saw that Lanner, Strauss Senior and Junior titled theirs – either by the occasion they wrote it for, or by the content within the piece and things that inspired them. For example, Wiener Carneval is the name Strauss Senior gave to his waltz that served as a contribution to the carnival of 1828. I wrote in my research, Lanner named his Op. 19 – Trennungs Waltz – or separation waltz, referring to the drunken fight he and Strauss Senior had. There, he even mimics the hiccuping. And of course, the title of the famous By the Beautiful Blue Danube, inspired by Beck’s poem, where each stanza ends with the line: ‘By the Danube, beautiful blue Danube’.

My quintet consists of bass drum, snare drum, triangle, suspended cymbal and tambourine. It is written in a form reminding of a miniature walzerkette, with introduction and coda before and after the small abcd dance sections.

The intriduction is similar to Chopin’s, in that it serves as a fanfare-like musical device that calls for the attention to the dance: 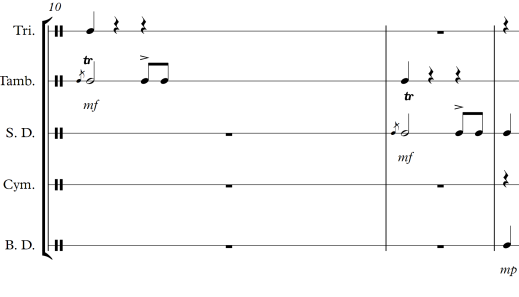 It consists of two parts – the first part, bars 1-8, already paints the picture clearly – the triplets in the bass drum allude to the galloping of the horses, and combined with the dark timbre of the instrument, it also gives a feeling of the night-time’s witching hour. In my opinion, there is something magical in the brief rhythmical figures that triangle and cymbals play, which serve like ornaments, reminding of the lights that are turning on and flickering.

The short second part, bar 9-11, gives the illusion of circular motion, where each instrument is like a revolving, passing figure. It then opens the dance, which will further depict the title. Now, I’m not too confident in the way I divided the sections, but here it goes.

With section a, bar 12-18, commences the typical oom-pah-pah of the waltz, played by bass drum and cymbals:

Afterwards starts the b section, which is similar to a, but the oom-pah-pah is now played by cymbals and snare drum, representing the bass note, and the two higher notes taken by tambourine. That is why the bass drum now has a function of playing two 4-bar phrases (the second is the repetition of the first with small variations):

With bar 27 starts the section c which is primarily based on oom-pah-pah, musically colored differently, since the pah-pah is played by the highest-sounding triangle. There is a slight alteration between snare drum and tambourine for the bass, oom note. This produced a nice effect, as if the direction of carousel’s rotation has changed. The cymbal and snare drum have a kind of closing role:

Then there is the d section, bar 34-41, which repeats the material from the second part of the introduction, but with instruments appearing a reversed order, and then it seemingly closes the dance: 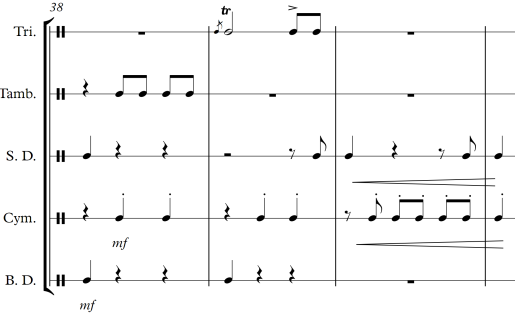 However, there follows a short coda, where the galloping is once again heard, culminating with into the actual ending:

To conclude, comparing to my other examples, this waltz has a nice orchestral feeling to it. With more instruments I was able to produce a fuller sound. I enjoyed writing it and I loved doing all the research.