Note: Before you look at my example, it’s a good idea to first refer to my two-part research. In the first part I write about tenor drum, but more relevant for this example is the second, which is about zortziko.

To start, there are three instruments – tambourine, tenor drum and triangle, but in my opinion, this is still a duet, since the last two would be played by the same player. At least that is how I conceptualized it. I chose the tenor drum because of the tamborileros – drummers that usually accompany the zortziko dance. Tambourine is there because I saw that many dancers have bells tied around their legs, similar to the ghunghurus in kathak dancing, which you can read about here. I thought that tambourine might symbolically represent them, while the triangle I chose for added interest.

The second thing is that the title is somewhat peculiar. I added the fantasia to zortziko, because of its free structure where zortziko is surrounded by other musical ideas. Also, I wrote ‘snake charming’ as the subtitle, because of the somewhat wild and fantastic sounding combination of timbres and the lilting rhythm. With this in mind, the tambourine represents the poisonous cobra, while tenor drum and triangle represent the snake charmer.

I divided the score a bit, you can download the full version bellow with audio.

The short piece starts with the introduction in 5/4 time signature, which I saw Alkan used, as I wrote in the research.

This opening actually inspired the promenade for my next duet, the Chinese New Year suite and bears a bit of a resemblance to it. It may be divided into mini ternary form aba1: the first four bars form a rhythmic phrase, the following two may be marked as b, and a1 is a brief reminiscence of the a.

After the tambourine roll, the snake starts the dance, and this two-bar zortziko rhythm with repetition introduces the main body of the piece, bar 11 to bar 35: 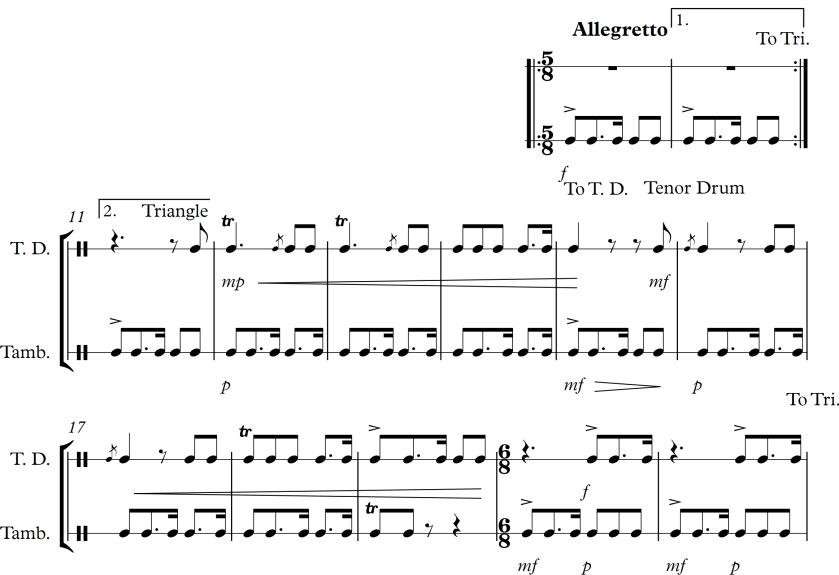 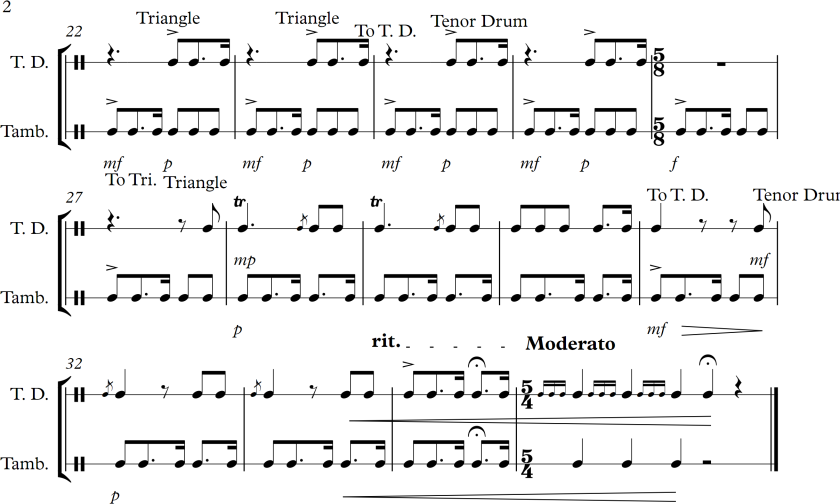 It consists of simple ternary form aba. The a includes two 4-bar rhythmic phrases, first played by triangle, then repeated by tenor drum, with small variations. The fragmentary b section switches to the hypnotic 6/8 where the punctuated first figure of zortziko is repeated in all instruments. It’s almost like the parody to all that controversy surrounding 5/8 measure I wrote about, involving 6/8.

Finally there is the repetition of the a, with the only difference being the last added bar in 5/4. It is similar to the last bar of the introduction, only this time the final tenor drum note provides the closure, the victory over the snake.

In sum, it’s not a very complicated example, which is why the analysis isn’t so long. I believe it’s mystical, imaginative, fresh and unusual, just like the title suggests.