The previous post introduced the Middle Eastern traditions and their modes with some basic notion. Here I will concentrate on and write specifically about the Arabic system.

I will first start with the building blocks of the modes – jins or ajnas in plural, which I also mentioned in the previous part of my research. The Arabic modes, which are heptatonic, are made of two sets – upper and lower. These can be joined on the same note – conjunct, be separated – disjunct, or overlap. It is based on the lower jins that maqamat are classified into families or branches. (Gu, 2014: 105) While jins are usually defined by tetrachords, there are some reasons to use trichords.

In case of Ajam and Jiharkah, this is because the three of their notes may be enough to convey the mood of maqam. Both of these are similar to the first three notes of the Western major scale. (Fig. 1) 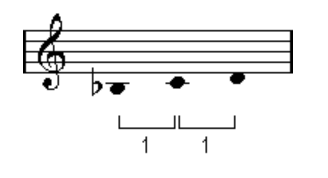 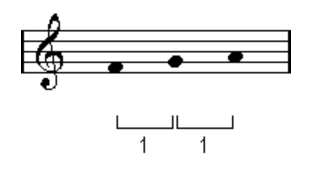 However, the third note is tuned slightly lower, which makes them more mellow. (Gu, 2014: 107) It can’t be shown in notation though, where this type of microtonal details are eliminated. The third note of Jiharkah may be tuned even a bit lower than Ajam (Maqam world),  but it is a question if this evermore subtle distinction was preserved in the modern maqamic temperament.

In case of Sikah and Mustaar (Fig. 2), there are many options that could follow; In other words, the fourth note would be impossible to predict. In both the next tone can be in three of the tonal intervals: 1/2 tone, 3/4 tone and the whole tone. 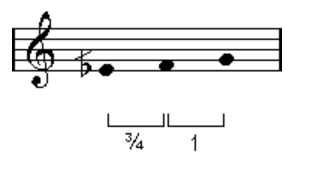 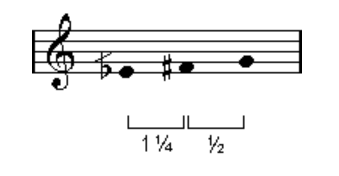 Unlike Sikah, Mustaar is quite uncommon, and is actually a kind of variant of the former, having the second note raised by half tone. Sikah usually starts on the half-flat tones, although I will also list a scale with an extreme tuning, where it will start on other tones.

Among the tetrachords, Hijaz, Bayati, Rast and Nahawand (Fig. 3) are very common. (Abu Shumays, 2013: 33) Once again, we have the microtonal variations of the certain tones depending on different ajnas. For example the E half-flat is slightly lower and more mellow in Bayati, comparing to E half-flat of the Rast, as well as Sikah sets.

Some other tetrachords include Busalik, which is very similar to Nahawand, but the tuning of the third note is lower, and then we have Kurd, Saba – partial Bayati, and Zamzama, partial Kurd. (Fig. 4) 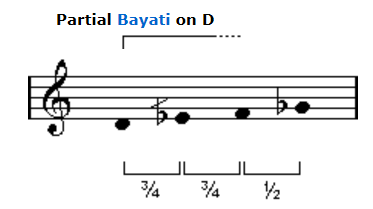 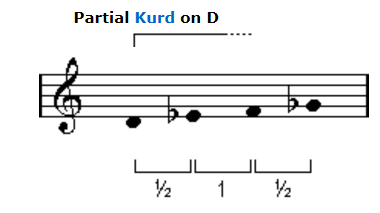 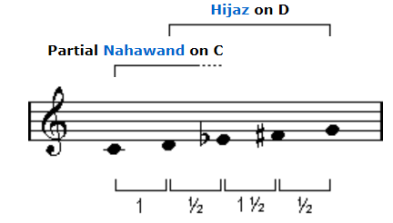 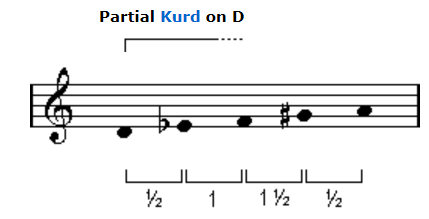 While some, like Scott Marcus, claim that there may be between seven and fifteen maqamat families or fasilah, but nine or eleven are most often discussed by modern Arab teachers and performers (Klignman, 2009: 62) Personally, I mostly found sources that cite nine of fasilahs. (Fig. 6)

I should also mention another way of classifying maqamat – by the starting note. (Fig. 7)Usually, each maqam is associated with a specific tonic note. That doesn’t mean that maqamat aren’t transposable, but certainly only to a few other tonic notes. Some maqamat also change names when transposed, because of the different mood produced.

It would occupy too much space to include all these modes from all the maqamat families with the combination of their ajnas, so I will put only several I found. (Fig. 8) For more detail, you can just take a look at the Maqam World website, which is the source of most of the pictures I’ve incorporated in this blog post. It offers audio examples as well. There is also a book by Cameron Powers with the maqamat with more detailed descriptions about the mood. By the way, notice the change of some notes in the descending form of few of the modes below. (Rast, Bayati, Sikah, Nahawand, Hijaz)

In the Ottoman system, grouped with maqamat is sayr – the charachteristic melodic development, motion or path of emphasized tones of a specific mode, which is conceptualized into the musical system. In this tradition, some maqams start at the bottom, go up and then come down, while other start in the middle, go up and then descend and similar. Arab musicians don’t rely strictly onto the conventional sayr progressions, but are rather quite general; The melodies either start at the bottom of the scale, or start instead at the top of the scale. Occasionally, the differences in the jins choices for the upward versus downward trajectory of the maqam might be found. (2013) But mostly, it is a minimal concept.

Yet instinctively, the Arab musicians do make it seem like certain maqam express certain pathways. But, as Abu Shumays (2013) writes, this accomplished through the collection of common modulations, where the “unconscious knowledge of both practitioners and listeners in the tradition (the more so the more the tradition is oral rather than written) … generates the senses of expectation and surprise.” It is these cultural conventions in modulation that guide the sayr, rather than the absolute underlying principles of melodic line and intervallic relations within a specific mode, like in the Turkish music. Marcus (1992: 175) illustrates this very well by describing his music lessons in Cairo:

“Lessons, each roughly an hour in length, were often devoted to a single maqam. However, after concentrating for the first ten minutes on phrases within the chosen maqam, my teachers commonly  spent the remaining fifty minutes explaining and demonstrating modulations that could be performed from this mode. Clearly, my teachers conceptualized more about modulation than about movement within a given maqam.”

Marcus also points out that this is where the maqamat contrasts the Indian music, where the ragas, which I wrote about in another post, are understood to exist independently. This is also another difference in the concepts of Arabic and Indian music, similar to the expression of musical time, where Arabic is based on the pronounced rhythmical patterns, while Indian is based on the fixed metrical measures. You can read about this near the end of my other post here.

To conclude, in the next part I will discuss more about the modulations and musical forms in the Arabic music. Take a look here.