Note: This is my second round, you can take a look at my first here. Also have a look at my overall research about the form here.

My second round is in g minor, following the third progression given in the Example 36 in the course material. First is the whole melody written out, with numbers denoting when the voices should enter: 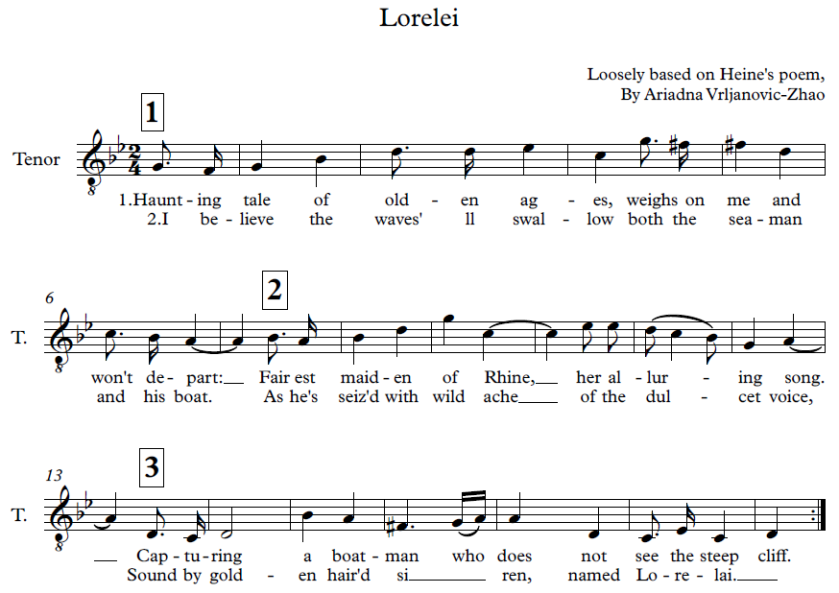 Full notation with all three voices:

The lyrics are loosely based on Heine’s poem Lorelei:

I know not if there is a reason
Why I am so sad at heart.
A legend of bygone ages
Haunts me and will not depart.

The air is cool under nightfall.
The calm Rhine courses its way.
The peak of the mountain is sparkling
With evening’s final ray.

The fairest of maidens is sitting
So marvelous up there,
Her golden jewels are shining,
She’s combing her golden hair.

She combs with a comb also golden,
And sings a song as well
Whose melody binds a wondrous
And overpowering spell.

In his little boat, the boatman
Is seized with a savage woe,
He’d rather look up at the mountain
Than down at the rocks below.

I think that the waves will devour
The boatman and boat as one;
And this by her song’s sheer power
Fair Lorelei has done.

As you can see it’s really loose. In fact, besides the above translation by A.Z. Foreman, there are several other versions, and what I did was borrow different words from different translations, in order to create the lyrics that could go well with the melody. This resulted in two verses of the round.

The melody has a dark atmosphere to it, characterizing the lyrics. It is a bit modal as well – I added the natural 7th degree in the first upbeat, which resulted in a distinct sound, almost a bit reminiscent of the Russian classical tradition. I enjoyed playing with the dotted rhythmical figures. Musically, the form may be one long, twelve-bar sentence, and another, shorter six-bar sentence.

It follows the harmony from the Example 36 of the course – i – VII – ii (or V). The only problem I find with the harmony is when the first two voices reach the unison, which is the sixth bar in the fully notated version for all voices. I did reach it in contrary motion, however, it still sounds a bit abrupt. It may also just be that Sibelius is simply over-pronouncing the sounds.

I wrote this example with tenor in mind. The overall ambitus is quite large, but I don’t think it would pose a problem for well-trained performers. I have a relatively big range myself – I can reach both soprano and alto notes, and I could sing this round in several keys.

All in all, I really enjoyed writing this round. I also wrote two catches for this course. Have a look here.