Note: Before you take a look at my example, you can read my research about the clarinet and the whole-tone scale, which I’ve chosen to use here.

While reading about how each scale, and especially, each instrument, possesses a unique personality, I was inspired to maneuver this aesthetic aspect and personify it into musical portraits. The subject of these musical portraits, which I thought would really suit this goal, are the Four Elemental Beings. Based on different elements, they are quite contrasting themselves, which allowed me to achieve interesting results. Thus, the first four examples of Project 7 are actually a series, which I called Esquisses for the Four Elemental Beings. The examples are longer than what the brief said, but I believe they fulfill the main aim of the project.

The first elemental being I chose to portray is Undine – the spiritual being of water, usually depicted as female. Here is the composition: 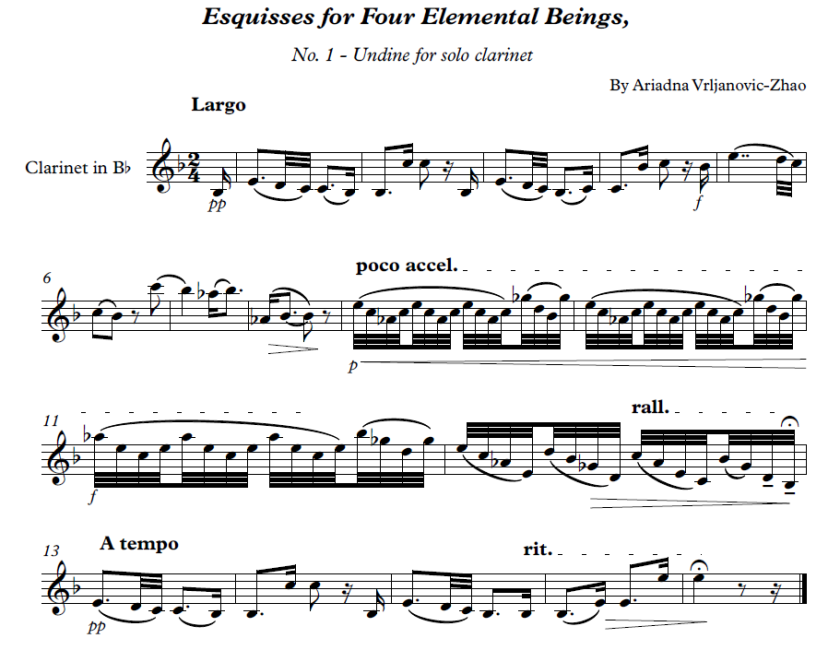 As for the instrument, I chose the clarinet, because for some reason, I’ve always associated it with water – whether its register is the deep Chalumeau, the brighter Clarino or any of its other parts. The tonality I chose to explore is the whole-tone scale. As it’s often described as dream-like and mysterious, it’s no wonder I chose to use it first.

It may seem a little bit weird that I’ve notated the example in whole-tone scale with d minor/F major key signature in front, since it’s usually notated without any key signature; however, as the clarinet is a transposing instrument (I chose the Bb clarinet that sounds the notes minor second lower than they’re written) I believe this facilitates the performer. Not only that, but as I didn’t have C as the pitch-centre, I think this key signature also highlights my musical intentions better.

I used the slow largo tempo with 2/4 time signature, and the overall form would be the standard ternary ABA1, with A1 being a slightly varied A.

Although section A (bars 1-8) is very fragmentary, I decided to analyze it as two musical sentences, that are a bit similar. The first one is in the rich Chalumeau register, consisting of 2+2 form – the second two bars being the repetition of the first two. The occasional higher Bb tones (notated as C) that appear at the end of bar 2 and bar 4 are a kind of echo effect. This part is sounds very dark, which the pp amplifies, almost like an introduction for the second sentence. The latter starts in bar 5, and the melody is lifted into the clear Clarino region of the clarinet. This sentence starts with the similar Ab-D-C-Bb motif (notated Bb-E), but with varied note values. The higher register and f dynamics also make it sound a bit different from the first sentence. I can imagine how through this section, the water nymph is coming above the surface of a dark lake to greet the moonlight, and then returning. I also like that this part sounds almost distant in time, as if from the primitive ages.

The contrasting B section (bard 9-12) uses rapid the augmented-chord arpeggios. As Alexander noted, the fast arpeggio passages give the clarinet a type of bubbly feeling. The first bar is repeated in the second bar, while the third is major 3rd (diminished fourth) higher, forming a brief sequence. The fourth bar uses the descending augmented-chord arpeggios in a brief downward major-second sequence. I’ve also added the accelerando and rallendando to add movement to this passage, as well as the crescendo and decrescendo for dynamic coloring. I imagine this part as the water nymph diving and playing under water.

I’m a bit concerned as to whether or not I’ve notated the slurs alright. Another question is if this is playable. While Adler gives some examples of the fast, virtuosic passages for clarinet, Alexander says that: “Many composers treat clarinets as if they were flutes, causing them to articulate as rapidly as these latter instruments in very quick tempo… although they do their best to keep pace with the Flutes… their execution is not really satisfactory,” citing the opening of the Italian Symphony as the example. Whereas my tempo is really slow – largo, here I give 32-nd notes. I could have marked the same passage with allegro in 16th notes, which shows that this passage here is quite rapid. I am hopeful though, since he writes that players can deal with this issue by breaking rhythmic figures into patterns of slurred and staccato notes, and that accomplished clarinetists can do double-tonguing.

The final section A1 (bars 13-17) returns to the pianissimo first sentence – 2+2 of A, with the second two bars being varied, and there’s no second sentence. With melody rising in the last bar, I can see the nymph swimming again towards the moonlight.

To conclude, I really enjoyed experimenting with the clarinet and the whole-tone scale, and exploring their mysterious side to create an interesting musical miniature that paints a portrait of a water nymph. Take a look at my second portrait of the elemental beings here.