Note: Before you look at this project, you can read my research regarding the dominant here.

Project 14 is about creating a piece within which the dominant is prolonged and varied as long as possible before its final resolution into the tonic.

Here is the short piece I composed: 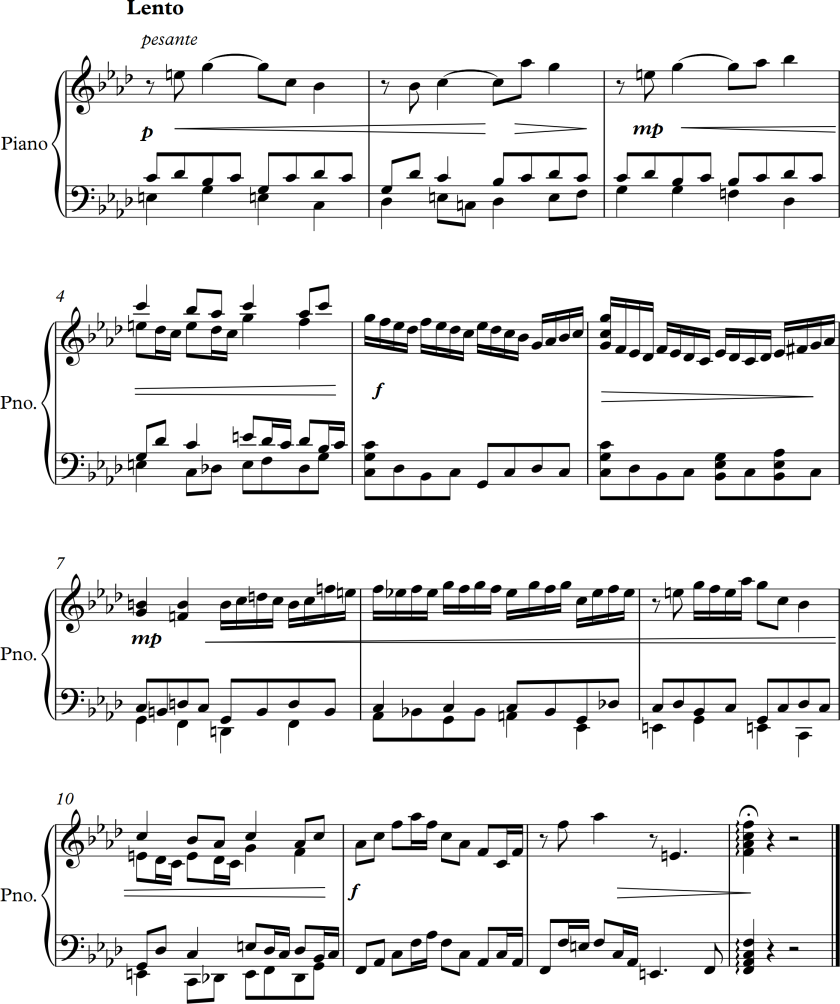 You can find and listen to its audio version below:

The key of the piece is F minor, and the tempo is the slow, lento. Because of the heavy sound, rhythm and some of the dissonant clashes among the notes, I decided to add the expression pesante for the piano. Although the piece is based on just one, dominant chord, and the improvisation to prolong and vary it, there are several segments which give this piece an overall ABA1 form, but not in terms of musical sentences, but rather in terms of fragments and passages. Still, in my opinion, the piece isn’t completely fragmental either, and is quite melodic in a sense. Something that can be noticed since the beginning are the constant quaver notes in the bass, almost creating an ostinato which links all the segments.

In the more silent section A (bars 1-4), there is a more contrapuntal treatment. There is no imitation until the fourth bar, the three melodic lines are all seemingly separate from each other, even with the repeated rhythms: the one in the aforementioned quaver movement in the middle voice, the one with the crochet motion in the bass, and the upper voice with rests and ties. With the forte dynamics, section B (bars 5-8) introduces the sixteenth notes, removing the previous feeling of three melodic lines. Here, the ostinato quavers appear to follow the sixteenth notes, thereby providing a more homophonic texture. In bar 7 and 8, as the brief suggested, I tried to enrich the harmony. Here, I added the secondary dominant to the dominant and a slight modulation to Ab major. In the final A1 section (bars 9-13) the initial theme of A with the three voices is repeated with a bit of variation in the first two bars. The last 3 bars of the section finally provide the resolution to the dominant. This is not only in connection to reaching the tonic. As the harmony arrives on F minor chord, the ostinato calms away, and the two voices in the same rhythm follow each other in the same direction, contrasting the earlier contrary motion. Finally, the two voices seem to be completely free at the cadence.

Overall, I think this was quite an enjoyable exercise. Again, just like the previous project, by focusing on just one chord, I got to explore its tones more extensively, but more so, it allowed me to investigate harmony in a new, deeper way. Having only the dominant also meant that I had more opportunity to play with the rhythm, counterpoint and other elements. Thus to me, the project was also an exercise on how to develop different musical components within the framework of variation and improvisation. This is something which I will use for the final assignment of the course. Take a look at it here.