Note: Before this example, you can take a look first at my research regarding the Scottish music, specifically the folksongs and the scotch snap rhythm, which influenced the construction of the piece below.

After the second example – Xin Tian You, where I looked at the way the pentatonic scale is used in the Chinese musical tradition, I decided to visit another, somewhat foreign place to me, where pentatonic scale also plays an important part in the traditional folk music – Scotland. Looking at its different folksong genres, I was attracted to the vocal dance songs – puirt a beul, often called mouth music. I initially composed the melody below:

However, just like for the pentatonic chant, I thought this could be developed more and thus, I created a longer piece, using the melody above as the starting point: 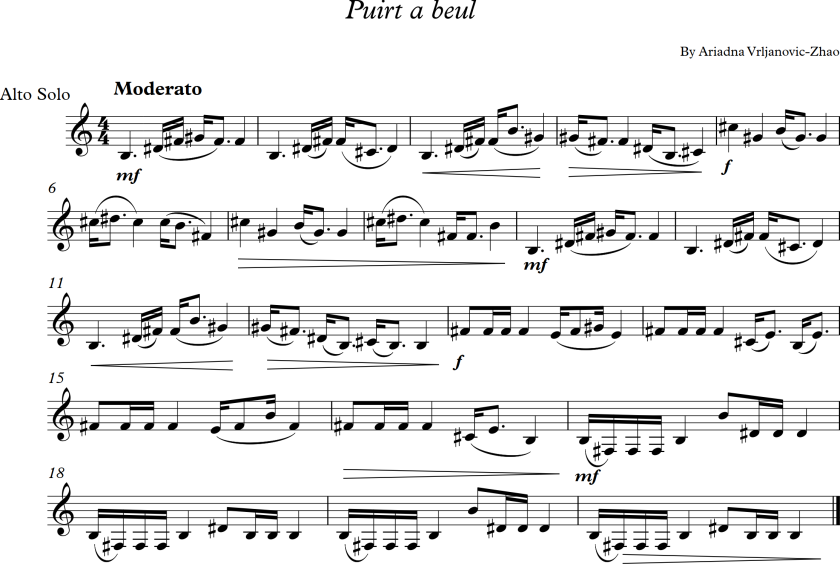 Here is the audio you can listen to:

Once again, my intention was not to stray away from the project aim of constructing a melodic shape, but rather to extend upon the exercise, especially since I had enough material to do so and create a larger musical piece. Also, the added parts are all rather fragmental, contrasting the development of the main melody that is a musical sentence. Although the brief mentions that there is no need to use time signature and bar lines, I did add 4/4, mostly for stylistic purposes. The whole piece is in moderato, nonetheless, because of the rhythm, it is still quite energetic, staying in the character of a dance song. Similar to both of the previous examples, there are larger interval jumps again.

The form of the piece is ABA1C + Coda. The A section (bars 1-4) is the initial melody I composed. Right away the characteristic scotch snap rhythm can be noticed. Another thing is the repetition, which can be quite an important constructional element when writing melodies, as I demonstrate in this example. Though, it is not literal repetitions that constitute the musical sentence, whose structure is 1+1+2, and in terms of the rise and fall of the melody, there is a gradation. In the first and second bar, the melody starts rising, but falls back again, while in the third, the melody rises even more, reaching a peak and then gradually descends through the fourth bar. Contrary to the modal way the pentatonic scale functioned in the previous examples, here there is a strong diatonic feeling, despite the missing semitones. This is mostly because the tones are linked in such a way that they outline chords, creating a harmonic framework.

The B section (bars 5-8) begins with a tonal shift to the supertonic region. It is very fragmental and consists of the repeated 2+2 phrases with some changes, mainly, the ending notes – first the dominant and then the tonic. Contrasting the A, the melody moves from the high notes to the lower, and then back to the high to repeat the cycle of the motion. The A1 section (bars 9-12) repeats the melody from A with some changes at the cadence.

After this ternary form, I also added the section C (bars 13-16). I decided to add it, as in many of the puirt a beul examples I listened to, there is usually a section where the tonality shifts to the subdominant region – the pentatonic scale switches from B C# D# F# G# B and E F# G# B C# E. The form also often consists of more than 2 different parts. It is fragmental, structure being the 1+1+1+1. Similar to this is the short Coda (bars 17-20), except it is different in rhythm and it returns to the tonic region, reaffirmed by the strong dominant feeling.

To conclude project 5, I am quite happy with all three examples. Although I have extended upon what was described in the brief of the project, I don’t think I abandoned its ideas. This is true, especially if we see that both examples that I turned into small pieces, use the initial melodies I composed as the starting, main musical points for the compositions. On the other hand, the added parts are all fragmental. They are just there for rather stylistic reasons of form, and to contrast the initial melody. In this way, I also differentiated between the overall notion of melody as a musical sentence, and the melody that is present within the fragmental phrases. Next to that, I used differing constructions, for example the free flowing form with minimal rhythmic and melodic repetition in the pentatonic chant, and the melody of the puirt a beul that is in an opposite way, based on repetition. Not only that, but the scale itself has been utilized in distinct manners – twice in the modal fashion and once within the diatonic framework. Finally, I also experimented with wider interval gaps that what the Example 21 and 22 showed. In this way, listening to my instincts, I believe I created an interesting contrasting group of solo vocal melodies, despite the limitation of staying in one scale. Next, I will explore and analyze some solo woodwind pieces. Take a look here.